Looking for words to describe the past couple of weeks; stressful, joyful at times, peaceful, some frustrations, a lot of gratitude. Overall Jenney continues to recover from her second craniotomy remarkably well.

It’s not been without some frustrations, like the pancake fiasco; in which Jenney became very angry when she couldn’t remember to wait until the pancakes were cooked a bit more before flipping them, and things about technology (her computer and phone) are still more difficult than they should be. But we’ve had a lot of wins as well; the Occupational Therapist said she was doing great and couldn’t really help any further, Jenney crocheted a new little hat for Marcus and it fit perfectly the first time, the Physical Therapist struggled to find anything to really help Jenney with, her energy increases daily as evidenced by not needing naps during the day any more and taking longer walks, and her capabilities and confidence of taking care of Marcus during the day also increase daily. We can hold standard conversations again (which I’m ever so grateful for) and she has proven that she can do some cooking, do the laundry, make the bed, shower and bathe herself, and in all respects function again as a normal human being. She even did a little gardening today :)

This woman is a fighter, with super human healing powers gifted from God. Her army of angels must be strong indeed.

Friday we started immunotherapy. This is the systemic treatment (similar to chemotherapy but much more modern) which is a series of drugs geared to boost her own immune system in a way that allows her white blood cells to attack the cancer throughout her body and her brain. We have a lot of hope for this treatment and have talked to cancer survivors who have gone through this treatment and have been cancer free for 10 to 15 years now. The clinic does not allow me to be with her while she’s receiving the IV, so I walked around the outside of the hospital for a while, read by the pond they have there, took a short nap in the van, and texted with her while waiting. The first dose took an hour, then we had to wait another hour for the second one to actually arrive (hopefully that doesn’t happen each time) and about another hour for the second dose and flush. It was pretty emotional for her, sitting in the waiting room and reading through the pamphlets of information they hand out, seeing other cancer patients walk in… it’s all becoming very real now for her as it sinks in. So much of the past 4 months she has forgotten due to the surgeries, and so sometimes it all feels fresh to her again. But her short term memory has improved a ton, and she remembers the important events, like going to the beach with us, or to the lake on a beautiful afternoon lunch picnic.

I need to find more of those sorts of things for us all to do.

Before the treatments started, we’d had a PET scan, and an MRI (once she’d had her staples removed). The PET scan showed at least one more subcutaneous nodule in her thigh, and there’s a debate as to a spot on the outside of one lung, but nothing life-threatening at this time, thank God. The MRI results showed a new growth in a different part of her brain about 6mm (the main tumors had been about 30mm). We’re consulting with our radiation oncologists about a gamma knife treatment for that this week. The immunotherapy should be able to treat this as well but since we don’t know how fast it’s growing, I’m hoping they can use gamma knife while it’s small because she simply cannot do another craniotomy if it grows too large.

Marcus is also doing really well. He weighed 5lbs 7oz last Monday at our pediatrician appointment, so he’s probably close to 6 lbs by now, if not over. He eats relatively well, though he has trouble with swallowing too much air sometimes and has to stop so we can burp him. That can be frustrating as it’s painful for him when he gets that much air, and he’s gassy afterwards which also seems to pain him. It can take an hour to feed him when he’s swallowing air, and then he wants fed again 2 to 3 hours later. He takes around 1.5 to 2oz per feeding, and we have a sweet friend from church donating breast milk which we give him half and half formula.

His preemie clothes are almost too small already at a month old, and his cheeks have filled out. He’s no Sebastian (that kid was a huge roley-poley) but he might get there at this rate. He’s got a pretty pleasant demeanor when he’s not gassy or hungry, and is staying awake during the day more and more. I stay up until about 1 or 2am with him for feedings and changings, reading or writing in between, and then Jenney’s mom Jeanne takes over after that. We get naps during the day and the schedule seems to work out pretty well for us. We let Jenney sleep during the night, but I think she’ll be able to take over when Jeanne goes home. I need to go back to work soon, so I hope that the immunotherapy treatments don’t tire her out too much. If they do, I think we can handle it though. I mean, it’s not brain surgery ;) But Marcus is also starting to go a bit longer in between feedings too, sometimes not waking up for 4 hours at a time. That should start to lengthen as his belly grows and he can store more at a time. 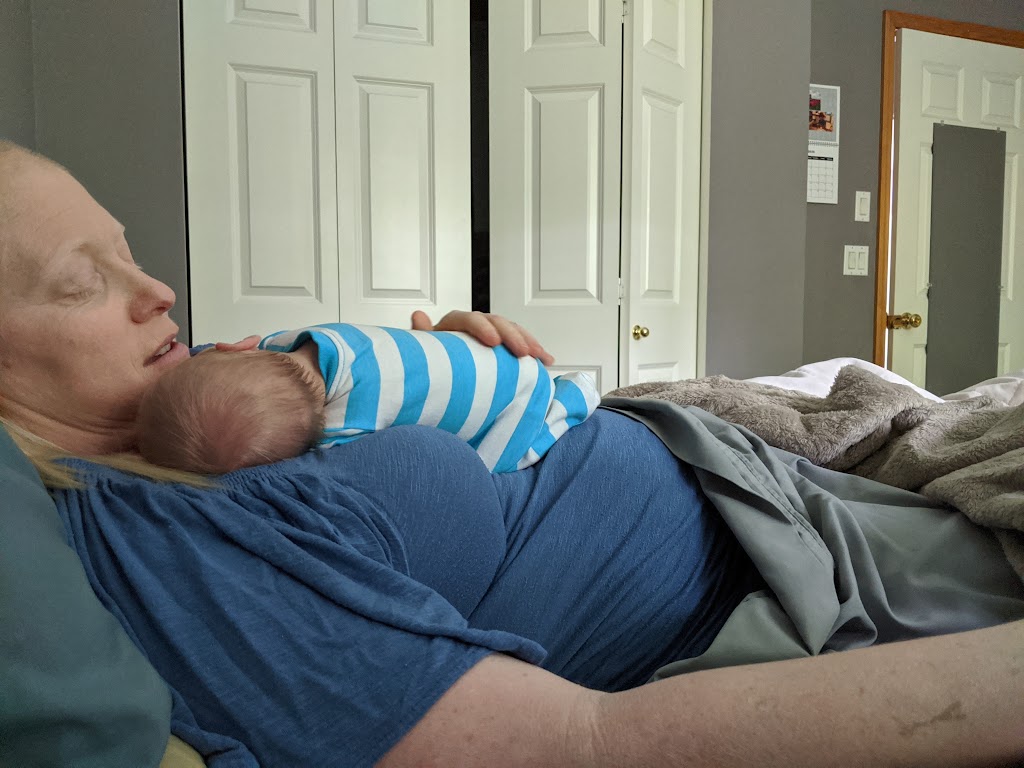