Praise the Lord, all went well with the delivery and Marcus Ezequiel was born May 4th at 12:19pm. He weighed 3lbs 12oz and is 42.3cm or between 16.5 - 16.75in. He is strong and breathing on his own. They have a CPAP machine on him but have already lowered that to room oxygen and it’s only assisting him slightly. They plan to take it off today. He’s moving, crying, and being feisty already (almost pulled out his IV!). He’s a fighter, and he’s so so tiny. You should have seen him throw a fit when they took his temperature with a thermometer under his arm! 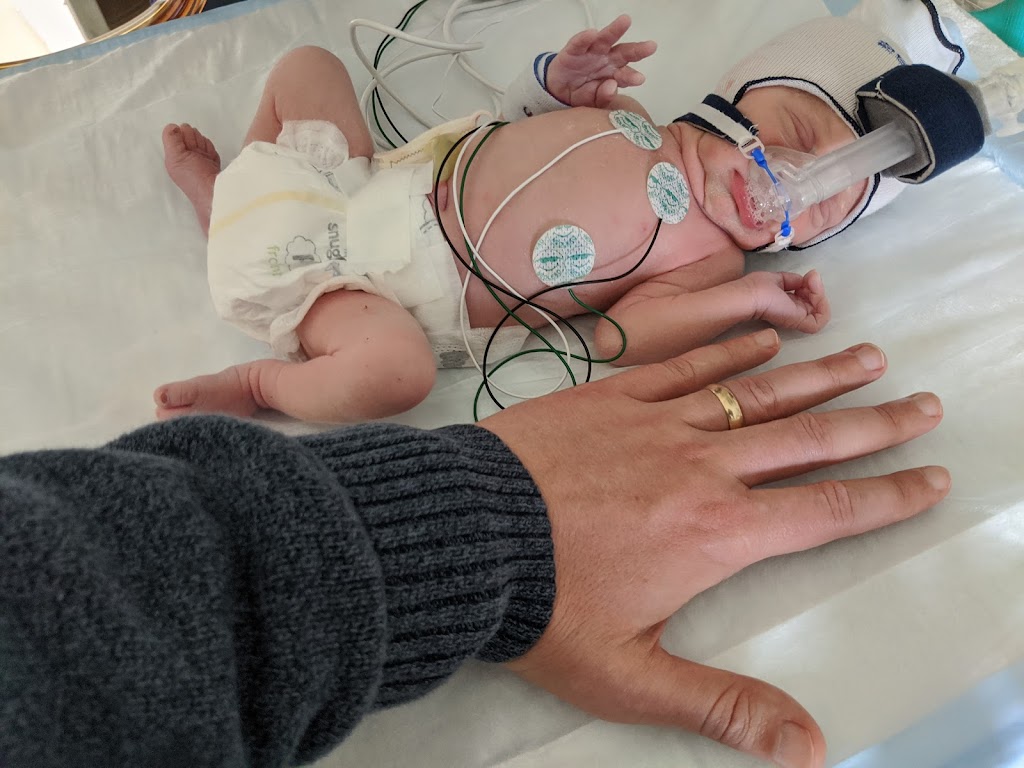 Jenney is doing well, though her memory has gotten worse. But let me back up a bit…

Sunday afternoon Jenney started complaining of a headache after a video conference with some of our relatives. She was walking a bit funny after that and started getting extremely irritated. When I tried to get her to sit down, she fought me, and while trying to get her out of the room with the kids, she sat down on the floor and cried. I got her to her room and cried a bit myself. Then I called our Oncologist to let him know about this and asked if we could get the MRI while Jenney was in the hospital, told him of what happened, and that her memory had been getting steadily worse over the last couple of weeks. He conferred with our OB and they asked us to come in right away to get an MRI before the delivery, which was scheduled for the following day. The Oncologist said that the Anesthesiologist would need to know as much information as possible in order to make a decision to use general anesthesia (putting her out entirely for the procedure) or an epidural. So we got ready and headed into the hospital, expecting just a quick scan and to return home.

They admitted us to the hospital and gave us a room in Labor and Delivery. They took Jenney back for a scan a while later and then we waited. They said we may as well spend the night and just be ready to go in the morning for the surgery to deliver Marcus. So we bedded down for the night and they came in around midnight with the results. I was pretty groggy but I wrote down that they told us they could see that the tumor had grown a bit and was starting to obstruct drainage giving her hydrocephalus. I sent some messages to relatives who I knew were anxious to hear and then went back to sleep until morning.

When we woke up Jenney didn’t remember anyone coming in, or that she had gotten an MRI. We were told the operation would be pushed back as they wanted to do it in the OR. A new Neurologist came in (Dr. Brown) and after evaluating her, thought that we should go ahead with the delivery as planned, but in the OR so that they could be ready to put in a drain for Jenney’s brain if necessary, but he didn’t think it needed to go in before the delivery. This only pushed back delivery about 2 hours, so we waited, and prayed, a lot. I took to writing some of God’s promises from the Bible on a whiteboard: Psalm 23, Philippians 4:13, 2 Timothy 1:7, Romans 8:28, Hebrews 4:16, Revelations 3:5.

With new restrictions at the hospital, and since they were putting her under at the OR, I could not attend. My heart sunk as they wheeled her out on the stretcher, and I gave them her phone so that they could take some pictures of Marcus as soon as he was born. 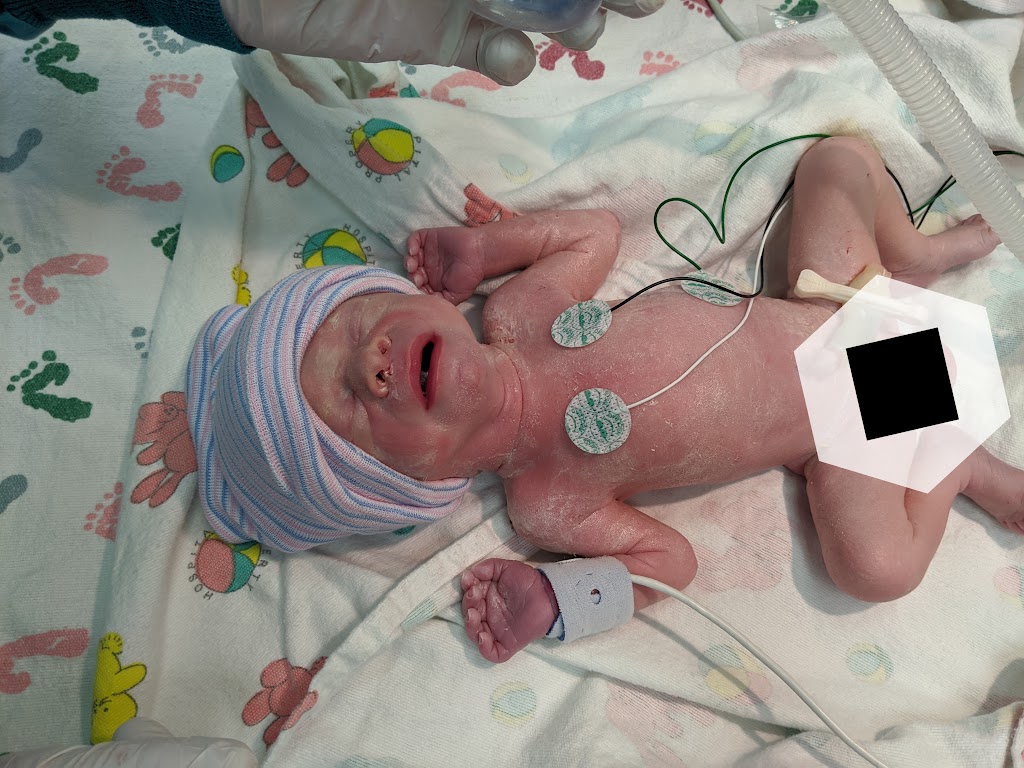 I waited back in Jenney’s room, writing and praying, until the Nursing Manager came to get me at about 12:30 to go wait outside of the NICU. She told me everything had gone as planned. As they rolled Marcus by and through the doors I followed, crying with relief most of the way. They told me everything had gone as planned, Marcus was breathing on his own and Jenney was doing well in the OR recovery room. I watched as the nurses all gathered to see how much Marcus weighed (they said it’s the highlight of their day and were taking guesses). He came in at 3lbs 12oz which is what one of the nurses had guessed exactly (she was holding him so had an unfair advantage, lol). I watched as they got him all hooked up to the monitors, got the CPAP on him, and listened to them as they gave me various information that I’m sure I’ll never remember as I could only concentrate on Marcus, and thanking God for answering all of our prayers.

An hour or so later, Jenney was wheeled in to see Marcus. We took a couple of pictures and a quick video for family. Jenney started looking pretty pale though so we left and wheeled her down a floor to her room. They’re only a floor apart but you have to go through security and such. As the nurse walked me out of the NICU she showed me how to get back in, how I needed to scrub up to my elbows for 3 minutes when entering, and gave me a blue band. I have about 4 arm bands on at any time now. They tell me I’d be popular in college. :P

Back in Jenney’s room we hugged and prayed and thanked God for being with us through everything. Then Jenney ate a late lunch while I talked with family on the phone, updating the kids and letting them know I’d be home for dinner. Jenney looked much better after eating, with more color in her cheeks. I felt the baby was in good hands, Jenney was in good hands, and the kids and Jeanne needed to see me and feel reassured. I left around 5pm for home.

At home I chatted briefly with my neighbor Steve, hugged the kids and Jeanne, and proceeded to fill them in on all the details of the day. I got a shower and we had dinner which Viola’s girl scout leader brought to us and then got the kids ready for bed. I put the boys to bed and we prayed together, thanking God for being with us and bringing Marcus safely into the world and that Mommy was alright. They’d been up late the night before so were out like lights. Prayed with Viola an hour later at her bed time. Then I started looking through school worksheets, trying to figure out what all of the things for school need to be done this week. Jeanne is helping the kids and hopefully I can help too when I’m not at the hospital. It’s a bit overwhelming, but we got all the papers into piles by subject, printed out Vincent’s 40 pages for the week, and got them into folders. I reviewed some of the NICU handouts they had given me, read some of Acts in my Bible, and then collapsed into bed.