Jenney’s second craniotomy is complete. The operation took over 7 hours. There was some complications in that they lost a piece of cotton during the operation and had to open her back up to search for it. They spent over 2 hours just doing that. It never showed on the X-ray and they never found it, so we hope and pray that it’s not still inside. If it is, there will be complications. But so far, Jenney has woken up and is speaking in full sentences. She’s ok. Praise the Lord!

Sebastian’s birthday over the weekend, and Mother’s Day were really good. Jenney smiled and laughed and Jeanne made pancakes for Bash’s birthday breakfast. We celebrated and gave gifts, had cake and spent time with family. We saw Marcus and fed him, rocked him, and loved him. We draw strength in seeing Marcus do so well and he continues to gain a little more weight each day. He’s now just above his birth weight. He was born 3lbs 12oz and went down to 3lbs. As of yesterday he was up to 3lbs 12.3oz. He still needs to retain his own body heat to get out of the incubator and into a crib, and he’s not yet drinking his full bottle, though he took 11ml out of 23ml for me yesterday. 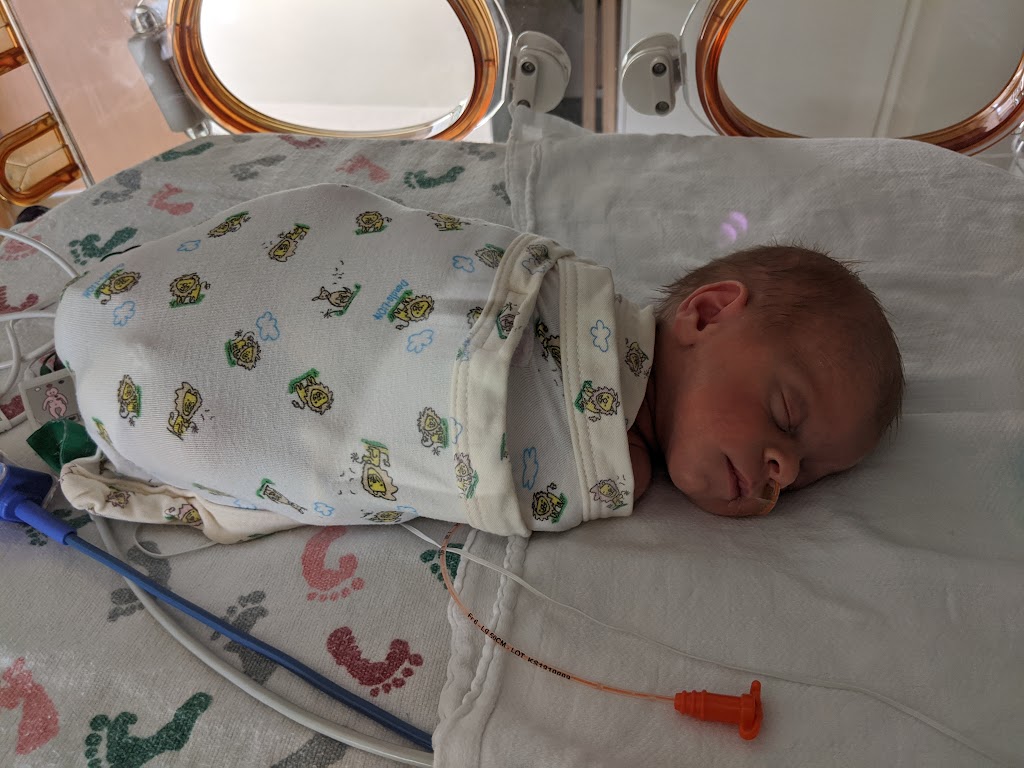 Tuesday was the day of the surgery and it was hard to say the least. It’s at a different hospital than the one Marcus is staying in, but just down the road a few miles. You can see Jenney’s room from Marcus’ room. We went to see Marcus just before the surgery one last time before-hand, and prayed over him before leaving. Then headed over to St. Joseph’s for pre-surgery admittance at 10:30am. I sat with Jenney as she changed into a gown, as they put in an IV, and talked with us about the anesthesia. We listened to K-Love on my phone as everything went on, drawing strength from the music, drawing strength from each other, and remembering why we were doing this: for our babies. We cried a little, laughed nervously, and had a chaplain come pray with us. I kissed her as they wheeled her away and went to the surgery waiting room once again. A peace came over me as I waited.

Jim, Jenney’s brother, came a little while later with some food. We sat outside of the hospital in his van, eating and talking. When we were done eating we went inside, back to the waiting room to wait. We talked, paced, and prayed in our face masks. We were pretty much the only ones there after a while. The doctor had said the operation would take a little longer than last time as he wanted to really take his time and get as much of the tumor as possible, but at hour 4 we started getting nervous. We prayed together. At hour 5 our apprehension increased a bit more, and relatives started texting. No news yet. Jim and I talked about work, and our childhoods, raising our children, listened to K-Love, and prayed. Sometimes I held Jim up, sometimes he held me up. I’m so grateful he could be there with me.

Around hour 7 they finally called me and said they were finishing up, that the doctor would be out to talk to me shortly. Half an hour or more passed before he did, and when he did his eyes were red, and he seemed frustrated. He told us that overall he was very happy with how the operation went. He told us about the missing cotton, searching for it, and coming up short but that he was very confident it was not still inside. He said she had not woken up yet, but had started to move as he was leaving, which was a good sign. The next 24 hours would be telling and he would call me with any updates as soon as possible, but that the hospital would not let me see her due to the new covid restrictions; we should go home and rest. I thanked him, wished him a restful night, and he walked out.

Jim and I sat down to cry, and to pray. The uncertainty was hard, but we didn’t necessarily have any bad news, and we clung to that. We left the hospital and went home, got some dinner, and said good bye. We weren’t discouraged, but it didn’t feel entirely encouraging either.

The doctor called again at 8:30pm and said that she was waking up, knew her name, and was responsive; all very good signs! He had ordered another MRI to make sure that the cotton was not present and to check on how everything was looking inside. He would call me in the morning when he knew more. I stayed up to message relatives the good news and to sit and talk with Jeanne. Jenney’s nurse called and updated us with everything the doctor had said and some more details as he had seen. Truong was a nurse there the last time (he’s a wonderfully sweet man) and he gave me his number so I could contact them at any point, but informed me that no one is allowed to visit the ICU during the covid restrictions at all. A mix of disappointment and relief started to set in. Our hopes were restored that Jenney was alright, and I slept pretty well that night knowing she was in good hands.

Dr. Goldman called in the morning and said that he was very encouraged. Jenney was awake, responsive, and speaking in sentences. She got his name wrong at first, mixing it up with our Oncologist’s name, but had corrected herself. She was showing typical signs of speech aphasia, but she seemed farther along in recovery already than last time. He mentioned that even though I wasn’t permitted to visit, if she continued to do this well they could possible take her outside in a few days and we could meet her outside. He said the MRI showed no signs of the missing cotton, and in fact showed that he had been able to remove the entire tumor this time! He’d also taken off the lump on her skull and said he thought that looked like melanoma as well. If it turns out to be, then I think we have found the origin as she has had that lump for a couple of years and we had been told by many doctors that they didn’t think it was cancer. Jenney had avoided getting it removed because of the cost of the surgery. In any case, I messaged everyone I could think of the good news. I cooked breakfast with Viola as we sang K-Love songs and our house was filled with joy. Jenney is going to be ok. It feels like a battle won; that we can rest a little easier for a while as Jenney heals and rests in the good hands of nurses we already know are simply amazing.

Yesterday I went to go feed Marcus and dropped off some things for Jenney, one thing being her cell phone. She can’t quite operate it herself yet, but the nurses said they would help her. And we got to do a video call with her last night. She seemed quite cohesive, if haggard. She wasn’t able to say our names, but she knew who we were, referring to the kids as ‘baby’. “Hi baby!” and Jeanne as ‘Mom’. She did get my name right, and it’s obvious she knows who we are. She remembers Marcus, thank God! We sent her our love, and she sent us hers, and we all smiled as we hung up. We slept well again last night.

This morning I missed her greatly as I lay in bed alone. I’m waiting to hear from the doctor or nurses to get an update, but overall we are all feeling very positive and looking forward to Jenney’s recovery and Marcus’ progress. I hope and pray for the day we can bring Jenney and Marcus home and all be together as a family again. That will be a joyous day! Waiting is hard, but knowing they are in good hands and are ok means I can weather the heartache of missing Jenney right now. I take solace in the fact that I can still see Marcus every day, and that Jeanne can be here to help with the kids while I do so.

God is good! Miracles are happening amidst the chaos and turmoil of our world right now. If you too are having a hard time in your life right now, please know that you can lean on God - call on Him, thank Him for what blessings you do have, and He will give you strength, peace, mercy, and grace. If you’re still alive and breathing, praise the Lord!